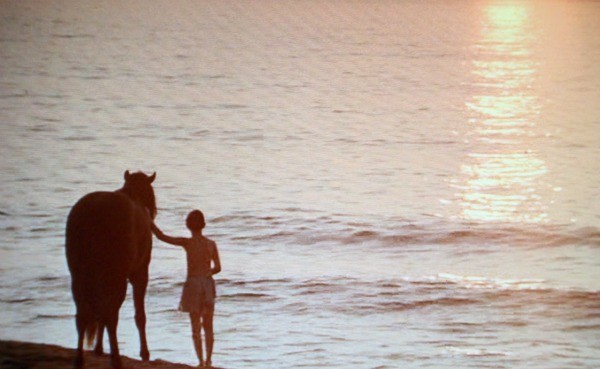 Sardinia in the Movies : What movies have been made in Sardinia?

Many films have been shot in Sardinia, some of the better known include John Huston’s “The Bible:  In the Beginning”, the Black Stallion,  Red Desert, Swept Away, and Terence Hills “The Tough and the Mighty”. And who could forget the most famous film set in Sardinia? James Bond –  The spy who loved me? If you are planning on a trip to Sardinia and have an interest in film, and would like to walk in the footsteps of the stars, read on as we explore 3 of the more famous films set in Sardinia. Black Stallion is a 1979 movie starring Mickey Rooney and Teri Garr, and directed by  Carroll Ballard.The plot is based around a young boy, who becomes fascinated by a mysterious Arabian Stallion he meets on board a ship whilst travelling with his father. After the ship is struck by lightning in a storm, the boy is thrown overboard and finds himself stranded on a desert island, alone with the horse. While waiting to be rescued, the boy and the black stallion forge a strong bond.

The principal location was Marina di Arbus , a long golden beach on the south-west side of the island, about 50km south of Oristano.

It is often referred to as “The Carribean of Sardinia” due to it’s blue seas and gorgeous landscapes.  It is also a popular destination for water sport enthusiasts, in particular surfers windsurfers and snorkelers. Arbus territory is some of widest and variegated you will find in Sardinia.

It was a difficult location for filming due to it’s inaccessibility – the crew and to hike over the multitude of sand dunes carrying their camera equipment on their backs.

The beach was the site of two of the most difficult to film stunts in the film. The first was the scene in which the stallion has to save young Alec from being drowned, by pulling him to the shore by his teeth. The horse didn’t take to the water at first, and the project was nearly abandoned before completion.

The second scene was filmed in the centre of Arbus, an old Sardinian mining town and about 25km inland.

This scene made everyone uncomfortable, including all the towns folk who came out to watch. Deadly snakes were flown in from Milan, and in this scene the Stallion must save young Alec from being bit by stamping on the snakes. The venom had been previously removed, and the snake’s handler was close by, but it was still a very nerve wracking scene. They say never work with children or animals! This scene had them both, with deadly snakes thrown into the mix too!

Matters were not helped by the living conditions for the crew. Facilities in Arbus were sparse, and being no hotel in the town the crew held up in an old school dormitory.

The scene where the boy learns to ride the Black Stallion along the beach was filmed at San Teodoro, the east side of the island near Olbia – a mile long stretch of beautiful fine-white sand. The beach is famous for its turquoise waters and the pink flamingos who rest here during migration. People have settled her since Roman times – and the evidence of this can be found in the nearby historical museum “Museo del Mare” Swept Away has been filmed twice – both using Sardinia as the main location. The first film was made in 1974 and directed by Lina Wertmüller. It’s original Italian title is “Travolti da un insolito destino nell’azzurro mare d’agosto” which translates as “Overwhelmed by an unusual destiny in the azure sea in ​​August“. Personally, I think “Swept Away” is more catchy.

The second “Swept Away” was filmed in 2002 by Guy Ritchie, presumably as a favor to his then wife, Madonna – who is also the star.

Both films follow a rich, spoilt, arrogant woman who hires a sailor to charter a yacht around the Mediterranean. They start off hating each other, until circumstances lead them to be trapped together and romance (of course) soon starts to talk hold.

The first film is worth a watch if you are an aficionado of Italian Cinema, the remake however should be missed (After seeing the remake, the direction of the original Lina Wertmüller, apparently stormed out of the screening howling “What did they do to my movie? Why did they do this?”)

In the original, The landing beach of the two castaways is Cala Fuili, in the town of Baunei. “A piece of Eden” is how some described this beach.

Cala Fuili is a secluded cove, accessible by car, located only three kilometers south of Cala Gonone, in the region of Nuoro.

Both films have a scene where the two leads roll around in each others arms on the beach. And both scenes were filmed at “Capo Comino” – a stunning stretch of beach on the east side of Sardinia, about 40km north of Cala Gonone.

Cape Comino is a perfect if you want to imagine yourself trapped on a desert island. Sand dunes backed by pine forests and shallow blue waters. The town of Cape Comino doesn’t offer much, a few houses and bars which are mostly closed out of season. Tourists looking for more to do should make their way to Siniscola, which is relatively close. Excursions can also be made from Capo Comino  to nearby Orosei, to Santa Lucia, La Caletta or the fantastic Cala Gonone. Boom! Is an adaptation of the Tennessee Williams play “The milk train doesn’t stop here anymore.” It is directed by  Joseph Losey and stars Hollywood’s most turbulent spouses, Richard Burton and Elizabeth Taylor.

Elizabeth Taylor plays wealthy “Sissy” Goforth, who lives alone in a large mansion on a secluded island (Isola Piana). Into her life comes the shadowy Richard Burton, who may – or may not be – the angel of death! Noel Coward also drops by in a very bitchy role which was intended for a woman.

Isola Piana is a small island of the south-eastern coast of Sardinia. The mansion was purpose-built for the film, and the set still remains on the island, albeit crumbling. Isola Piana has history – it was a penal colony, has played host to a monk community, and is the “historical centre of tuna fishing”.

There are no cars, motorcycles or bicycles allowed on the island. It is now a nature reserve.

One point of interest is the islands tradition of diving off the pier to say goodbye to a friend.

The film didn’t go on to much success, but Tennessee Williams considered it the finest of all the screen adaptations of his plays.

The Spy who loved me

Now we reach the cream of the crop. Walk in the shoes of 007 himself!. Directed by Lewis Gilbert and also starring Barbara Bach, the spy who loved me was filmed in 1977, and was one of the best of the Roger Moore era. In it, Bond must investigate the hijacking of British and Russian submarines carrying nuclear warheads, with the help of  K.G.B. Agent Anya Amasova, whose lover he killed.

In the movie this is where Bod and Amasova check-in before picked up on the speedboat by Naomi (Caroline Munroe). The receptionist here is played by the gorgeous Carry On regular Valerie Leon in a non-speaking role.

We all remember the car chase in the Spy Who Loved Me – the White Lotus Espirt being followed by the helicopter. This was filmed in several different stretches of road in Sardinia. Most parts were filmed in the East, just south of Porto Cervo and in and around San Pantaleo.

The most recognisable point during the pursuit is arguably the piece of concrete wall, from which behind the helicopter rises up. To get here you need to drive south from Cala di Volpe on the coastal road. After 2km you will notice a blue signpost on the left which reads “per bivio S. PANTALEO km 6“. Directly behind that is the famous piece of concrete. There are magnificent views from here, and is a great spot for a photo.

Other parts of the scene were filmed on the east side of Sardinia, the SP55 road, between Capo Caccia and Tramariglio, Sardinia. It is here where the bike files the missile.

The Lotus jumps into the ocean at Liscia di Vacca, a bay (which translates as “beach of the cows,” because it is where the shepherds used to bring their flocks to pasture.) and emerges from the sea at Capriccioli beach – the “Jewel in the crown” of Sardinia beaches and surely the  scene from the film which people remember most fondly.tr

Spiaggia Capriccioli is in fact split into two bays – if you want to see where the lotus esprit emerging from the sea was filmed, go to the southern bay – and be sure to avoid high season. The beach is not very large and can get very crowded in the summer months. The aforementioned hotel Cala Di Volpe is but a short distance away if you want to finish your bond tour with a martini whilst watching the sunset.

The 10 Best Museums in Sardinia